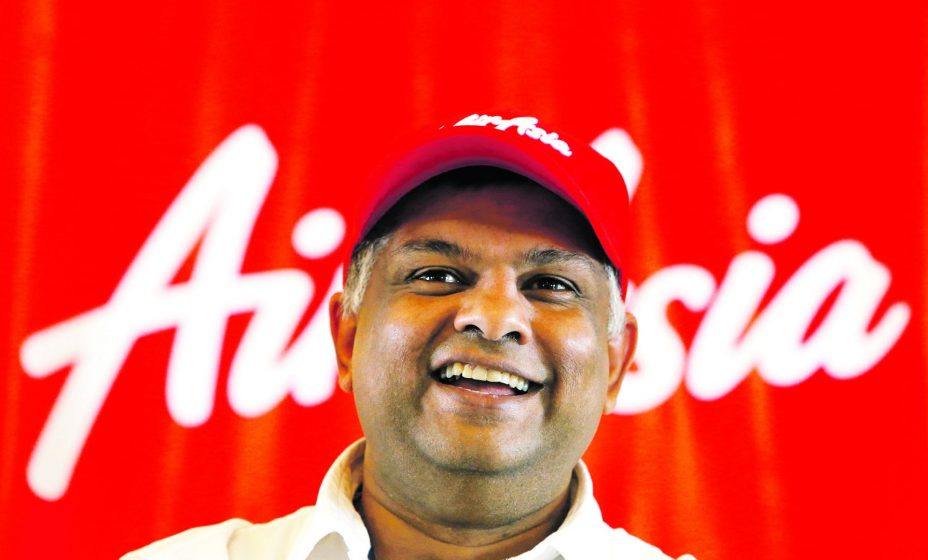 1) You don’t need to know everything

I came from the music business. I knew nothing about planes. To all the entrepreneurs out there, you don’t need to know everything about what you want to do. It’s all about the idea, it’s about passion, it’s about implementing it.

Don’t let anyone tell you that you can’t do it. You’ve got one life, so you can’t press the rewind button and say ‘I wished I had done that.’

So I recommend to all of you out there, just do it. Live your life to the utmost, be positive. If you fail, at least you have tried.

I have failed miserably at Formula One, but I have no regrets because I got to stand with the greats from Ferrari, McLaren, and others.

3) Passion is a key problem-solver

Dreams do come true. Don’t worry about failure. You have one life, make the most out of it. Nine times out of 10, if you have the passion, you will find a way to work through it.

There are so many great ideas that never took off because of a lack of marketing.

Marketing is not about the dollars, it is also about public relations (PR). In AirAsia, we had no money. So I ran around with a red cap on and said controversial things so that the press would always take a picture of me. That was our marketing in AirAsia’s early days.

We have been through so many issues, and marketing played a key role in overcoming them.

Remember SARS (severe acute respiratory syndrome)? At that time, nobody wanted to fly; we all thought we are going to die.

Everyone cut their advertising, but I told my guys not to cut because this was the best time to build our brand. In fact, we tripled our advertising and everyone looked at me and said, “Are you on drugs?” I said, no, it is the best time because no one else is advertising.

When the first Bali bomb attack happened, everyone cancelled their flights. I said to the guys, we cannot let the Bali route die. We must continue to fly.

So we came up with ‘Love Bali’ campaign, giving away 10,000 free seats, and it worked. All 10,000 seats were snapped up in like under one minute. And all those who got those seats told all their friends about it on social media. Your best advertisement is your customers.

We realised the power of social media very early on, so when Facebook and Twitter came up, we latched onto them. We were early adopters. We now have 32 million people on our various social media platforms, and 7 per cent of our business comes directly from social media.

The Bali campaign taught us that our best advertisements are our customers.

6) Don’t be scared of complaints

Complaints are actually free market research. Someone took the effort to write to you to tell you where things went wrong and how they should be improved. These are things that companies pay a lot of money for consultants to tell them that same thing.

So we treat every email preciously.

7) Focus on one image when it comes to branding

During the early days, there was the word ‘AirAsia’ and a logo of a bird in our branding.

So, back to our earlier AirAsia brand, we said drop the bird – we felt it was facing the wrong way anyway – and we used ‘AirAsia’ as our logo. Just one image. Why spend double the money to promote two images?

We also dropped the blue and the green colours. I tried very hard not to go with red, because everyone thinks that I want to be Richard Branson [the Virgin Group founder and Fernandes’ former boss] … but it was the best colour, so we picked red.

So yes, the colour does make a big difference! 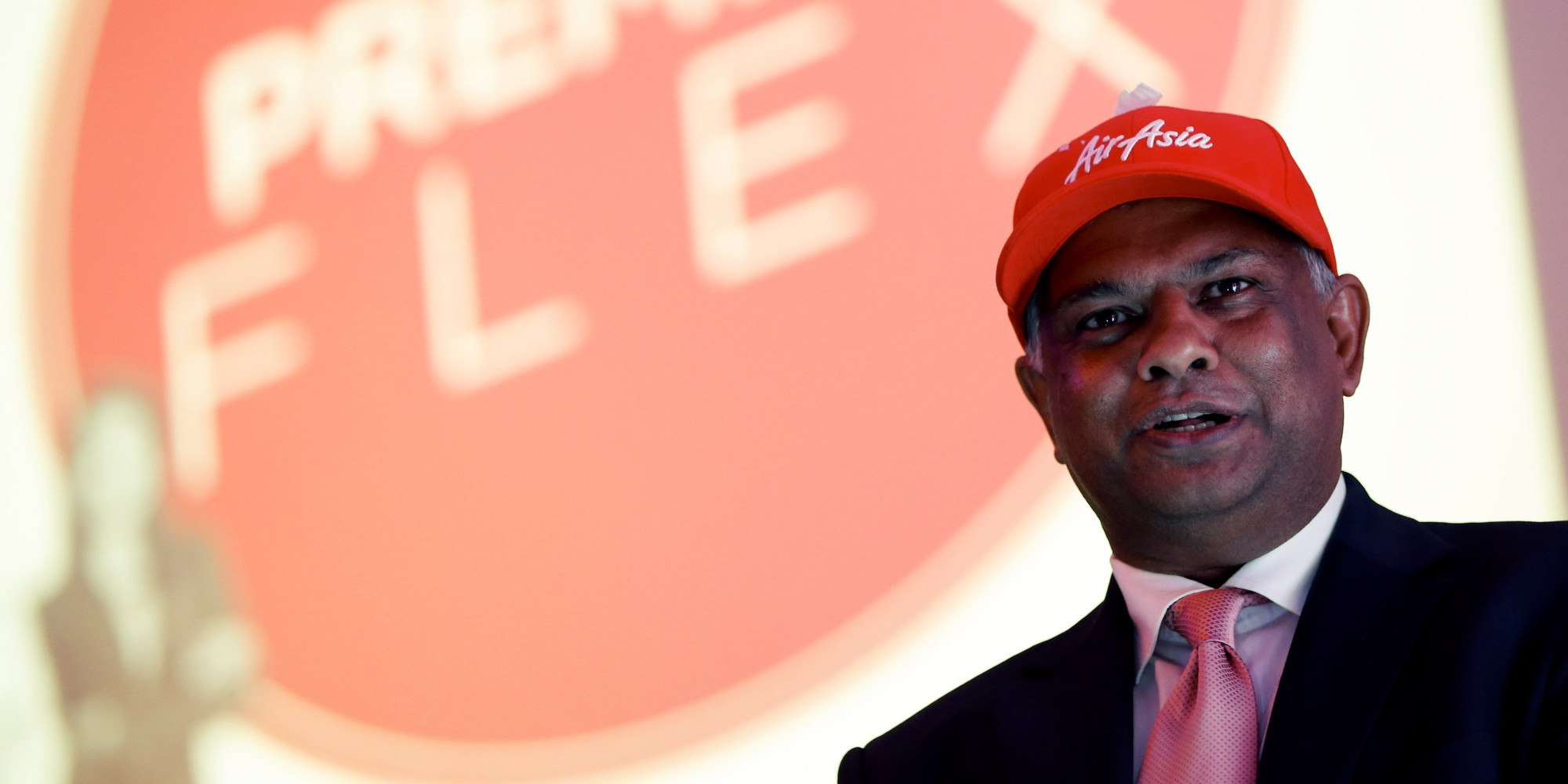 What I used to do – although I don’t do this anymore – was that once a month, I would carry bags, I would be a cabin crew [member], and also at the check-in counter.

I did this for two reasons. The first is that you can’t be an effective CEO (chief executive officer) unless you go on the ground to experience the real situation.

Here’s a true story. The baggage handling team told me that they needed belt loaders. I told them, “No, we can’t buy that as it’s too expensive.”

So there was a lot of bags. I broke my back in the process, and I told my team that they were right and I was wrong, and let’s buy the belt loaders.

If I didn’t do that [go on the ground] and just sat comfortably in the office, I would have made a wrong decision, damaged a lot of bags, and probably started a union.

The second reason [for going on the ground] is that I wanted to look for talent. I wasn’t looking for the talents from Oxford or Cambridge, I was looking for the Grade 3 SPM [O Levels equivalent] kind of guys who needed a second chance.

9) Never underestimate the potential of your staff

I broke all the rules in terms of hiring people. To me, as long as you have a dream, you can do anything.

There was an ex-cabin crew member – she came up to me one day and told me that her dream was to become a pilot. I told her to go for it.

Then she called me up one day and asked if she could take part in the Miss Thailand [beauty pageant], and I told her okay, as long as I get to use her photographs in our marketing materials.

She won the [Miss Universe Thailand] pageant and recently became a captain – so we are the only airline in the world with a Miss Thailand flying with us.

The moral of the story is that we have such a flat structure that she was able to tell me what her dreams were, and we were able to make a raw diamond into a diamond.

Another one of my boys, a baggage handler in Kuching, told me he wanted to become a pilot. I told him to go for it. He passed all the exams … he had the top marks in the flying academy. Today, he is a captain.

We have many of such stories at AirAsia.

Your biggest assets, besides your ideas, are your people – because at the end of the day, it is the people who will deliver your ideas.

We have a huge amount of data that we don’t know what to do with it, but everyone else wants our data … so we figured it must be something very valuable and there must be an opportunity there.