5 Habits of the Wealthy That Helped Them Get Rich 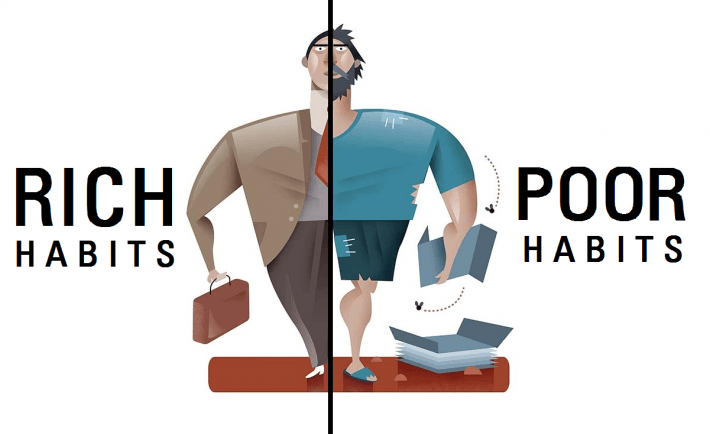 It may not seem fair, but the fact is the “income gap” is increasing and most financial experts only see this trend continuing with no end in sight.
In preparation for this column, I sat down with someone who knows far more wealthy people than I will likely ever meet: Jeff Rose. Rose is a certified financial planner, author and blogger at GoodFinancialCents.com, as well as a millionaire himself, who dedicates a good portion of his time to helping people become, and stay, wealthy.

I asked Rose why he thought the income gap was growing. He mentioned five primary things that wealthy people simply do differently than the rest of the world. Here are those five, in no particular order.

Rose explains that the wealthiest people he works with routinely “throw spaghetti at the wall to see what sticks.” In other words, they try a lot of different things, knowing that a lot of it will fail.

They take those risks because they know that failure is just part of the process in discovering what will truly work to build more wealth. Furthermore, as Rose explains, the rejection of those ideas invigorates the wealthy into finding what will work, a stark contrast to most of the population that simply looks at failure as a road block.

2. They invest in themselves

According to Rose, “wealthy people don’t look at the money spent on personal growth as an expense, but an investment.”

While many individuals conserve every penny equally, the wealthy understand that strategically investing in themselves will produce a far greater return than any stock, real-estate investment or business venture.

Whether it’s purchasing a book, hiring a coach, joining a paid mastermind group or another source of paid self-improvement, the wealthy see this as an investment. Do you?

3. They associate with those they want to emulate

When the human body gets too hot, it produces sweat in an attempt to cool down. When it becomes too cold, it shivers to produce heat. In other words, the human body is constantly adapting to keep its temperature at the same comfortable spot. This automatic leveling is a biological process known as homeostasis and is found in numerous aspects of life.

From human biology to the temperature of the earth to a car’s cruise control to the thermostat in your house, homeostasis is a fact of life that governs nearly every aspect of your existence. And, as the wealthy have discovered, homeostasis can also be a powerful way to build wealth.

As Rose stated bluntly to me, “If you want to be rich, hang around rich people.”

Or as financial TV personality Dave Ramsey often says, “if there are four broke people in a room, you’ll be the fifth.”

Wealthy people have discovered that they can grow their wealth simply by associating with those who are even more wealthy. Humans pick up the habits and strategies of those in their immediate surroundings, and the wealthy have learned to use this homeostasis to their advantage.

4. They have a dedicated morning ritual

While most of the world is hitting the snooze button 14 times in a row each morning, the wealthy have already begun increasing their net worth.

“Most of the multi-millionaires I know have a dedicated routine, a ritual, that they do each and every morning,” Rose says.

This morning ritual could include exercise, affirmations, goal reviews, breakfast or whatever else helps them start their days with a bang. They start strong, accomplishing more before noon than more people accomplish in a week.

For those struggling to get started each morning on the right foot, Rose recommends two books:

In my own life, I’ve found this truth incredibly powerful. Since instituing a morning routine, I’ve quadrupled my income, written and published a bestselling real-estate investing book, lost 10 pounds, bought my dream house and deepened my relationship with my wife. Not bad for just a few minutes each morning of dedicated routine.

5. They review their goals consistently

Finally, according to Rose, the rich have clearly defined goals and continually review them to track their progress, make changes and develop strategies for meeting those goals. This process of immediate feedback allows the wealthy to make quick changes to their plans to keep the course in a rapidly-changing world.

While most of the human population gives little to no thought on their futures, the wealthy are reminded daily of where they are headed. Like a family taking a cross-country trip in their minivan, the rich have their road map spread out on the dashboard so they can navigate the fastest, easiest route to their destinations.

Rose admits that the wealth gap is far more complicated than a simple “five-point blog post.” However, he continually witnesses these five traits guiding the lives of those who are getting richer and has used them in his own life to create multiple businesses and build some serious wealth himself.

These five actions create a positive-feedback loop that will continue to make the rich richer, and there’s no sign of that ceasing. The good news is, however, these five actions are all things that the average American can put into practice today. Will you?

Top 10 Secrets of Getting Rich

9 Proven Ways To Get Back Quick From Failures