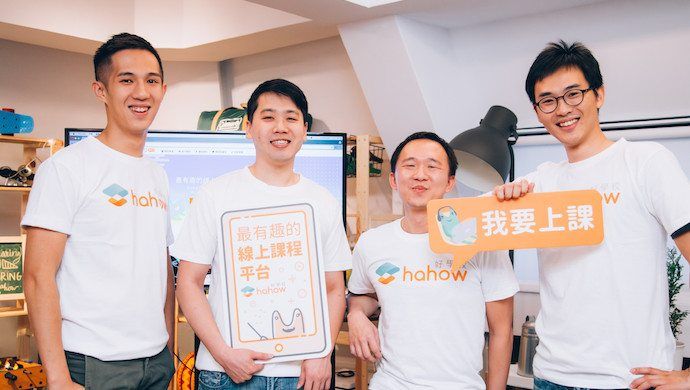 Hahow, an online talent crowdfunding platform based in Taiwan, announced the completion of a NTD10 million (US$316,000) angel funding from Cherubic Ventures, an early stage technology-focused venture capital firm.

In a press statement, Tina Cheng, one of the partners in Cherubic Ventures, said that she reckoned the typical school education no longer satisfies the demand from the current labor force market. Hahow’s services and products, however, not only fill the gaps between the supply and demand sides but also provide a secure business model.

“With the acquisition of the funding, we are able to better optimise our user interface and add more interactive features to make learning more interesting. Moreover, we are going to accelerate our expansion in Taiwan,” shared Arnold Chiang, Hahow’s co-founder and CEO, in an exclusive interview.

The success of fundraising comes with no ease. Previously, Hahow’s team tried to solve the common problem of cross learning, particularly to the limitations when exchanging talents or skills, but they quickly found out their first platform didn’t offer stable revenue model and were unable to overcome the spatial and temporal limitation.

In order to fix the issue, they launched another new platform and solve those thorny problems by becoming an e-publisher alike and with the use of video — evolving the initial product to an even more powerful and convenient online course platform, which is today’s Hahow.

One of the integral elements in Hahow’s platform is the application of crowdfunding. While some might desire to make some extra money by offering services or skills, the special features not only guarantees a minimum wage which is set by a user, but also filters out some unwanted courses if the crowding figure doesn’t meet the course creators’ expectation.

Until now, there are nearly 150 online courses accumulated in Hahow’s platform. Surprisingly, one of the information design courses has even been ordered by over 12,000 users and is earning a cumulative amount of around US$400,000 for the course creator, becoming the most successful case Hahow has ever carried out.

“Currently, half of our members are paid users. We have roughly 10 per cent members coming from overseas markets, such as Hong Kong, Malaysia, and the U.S., without any marketing effort. That’s all because of word of mouth,” indicated Chiang, with a chuckle.

Hahow was founded two years ago. Subscribing to the agile movement and looking deep into the lessons learned from the team’s previous experience, Hahow has discovered its own niche market and is ready to get off the ground, bringing a much-needed evolution to the entire education industry.

“Through the power of technology and creativity, our mission is to create an effective learning community, empower every corner of the world to explore knowledge and skills happily,” shared Chiang at the end of our interview.

What Startups Can Learn From Casinos